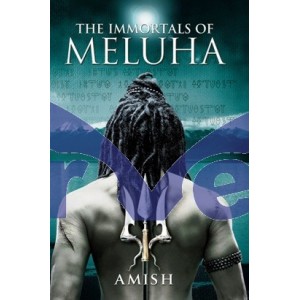 The Immortals of Meluha

The Immortals of Meluha is the first novel of the Shiva trilogy series by Amish Tripathi. The story is set in the land of Meluha and starts with the arrival of the Tibetan tribal Shiva.

This product is no longer in stock

Shiva, one of the chief Hindu deities, is portrayed in an entirely different light in Amish Tripathi's debut novel, The Immortals of Meluha. The first book of The Shiva Trilogy, The Immortals of Meluha charts Shiva's journey from the mountains with his Tibetan tribesmen to the kingdom of Meluha, which is occupied by the Suryavanshis, a race of people who are descendants of Lord Ram and live along the banks of the River Saraswati.

When an episode involving the preserving drug somras leaves his throat blue, Shiva is hailed as the 'Mahadev' according to an ancient prophecy, the man who'll lead the Suryavanshis to victory against the Chandravanshis. Caught in the middle of a tense conflict, Shiva must now make some quick decisions to save Meluha from the wrath of the evil Chandravanshis and their twisted and disfigured assassins, The Nagas.

Will Shiva be able to rise to the occasion and save the clan of the Suryavanshis?

Why does the Princess Sati shy away from speaking to him every single time?

Who are the Nagas, and why are they assisting the Chandravanshis?

Set in 1990 B.C., the book takes readers on an imaginative and exciting journey through Amish's world.

3 other products in the same category: