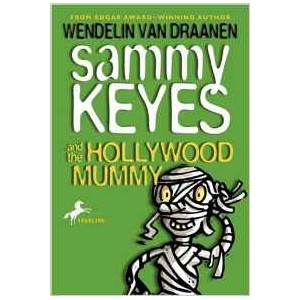 Sammy Keys And The Hollywood Mummy

Sammy's mother is out in Hollywood, trying to make it as an actress. After her famous appearance in an anti-flatulence commercial, Sammy has always been rather sceptical of her mother's endeavours, and somewhat embarrassed. In this book, she goes (rather reluctantly) to LA to see how she's getting on and becomes involved in a Hollywood mystery..

When Sammy finds out that her mother has changed her name, dyed her hair, and shaved ten years off her age, she knows it's time for Lady Lana to get reacquainted with reality.
Sammy hops a bus to Hollywood and finds her mother in deeper trouble than she imagined. Lana's phony persona is crumbling just as she is being considered for the part of a lifetime. So when one of Lana's competitors for the big role is found dead in the room next door, Sammy can't help wondering: Is her mother the next likely victim . . . or the prime suspect?
The Sammy Keyes mysteries are fast-paced, funny, thoroughly modern, and true whodunits. Each mystery is exciting and dramatic, but it's the drama in Sammy's personal life that keeps readers coming back to see what happens next with her love interest Casey, her soap-star mother, and her mysterious father.

30 other products in the same category: