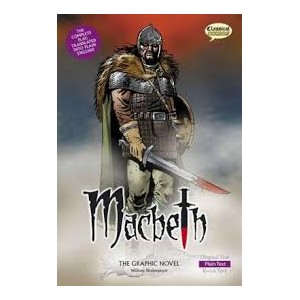 The complete play translated into plain English. It's 11th century Scotland. Macbeth, Thane of Glamis, is one of King Duncan's greatest war captains. Upon returning from a battle with the rebellious Thane of Cawdor, Macbeth and Banquo encounter three witches, who prophecy that Macbeth will become Thane of Cawdor and then King. They also prophecy that Banquo will become the father of kings.

When Lady Macbeth hears this, she is determined to push her husband to take fate into his own hands and make himself king by murdering Duncan. Macbeth is reluctant to harm Duncan. But, when the King makes arrangements to visit Macbeth's castle, the opportunity presents itself. Pressed on by his wife, Macbeth kills Duncan and blames the King's drunken attendants, who he also kills. However, Macbeth is racked with guilt and begins to see apparitions. When the body is discovered, Malcolm and Donalbain, the King's sons, are suspicious of Macbeth and flee for their lives.

26 other products in the same category: